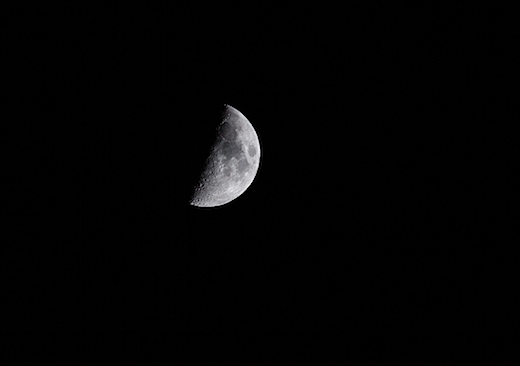 Terminator: "The boundary between the illuminated part of the Moon's disc and the dark part is called the terminator. At the time of the quarter moon, it is essentially a straight line running north-south. At other times it will appear as a curved line."

(Taken handheld earlier tonight with my son Thom's nice 70-200 Canon zoom lens. Click on the image for a larger version.) 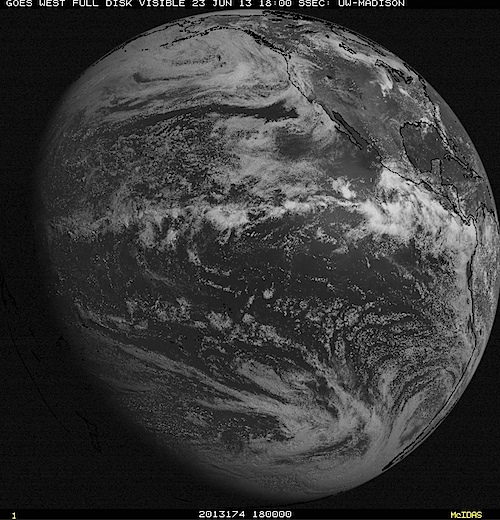 Sunday afternoon activity: Sitting here wondering if it will really rain over the next couple of days, as the forecasts have suggested for a few days, or not. So far, we've had clouds and some drizzle. While I ponder the relatively unusual prospect of a late June rainfall in the Bay Area, I was looking at weather satellite pictures, and then at loops of satellite pictures made over the last few hours. I started to wonder whether I could find a full day's worth of those looped images, or maybe a week's or a month's. I still haven't found anything like that. But I did find plenty of versions of the the stock views from NOAA's GOES West (GOES stands for Geostationary Operational Environmental Satellite). No matter how many times I see it, the view of the full disk of the Earth (above, taken this morning; click for a larger image) evokes wonder. Below (click for much larger image) is the West Coast in beautiful enhanced infrared color, complete with the weather systems that could bring us rain. 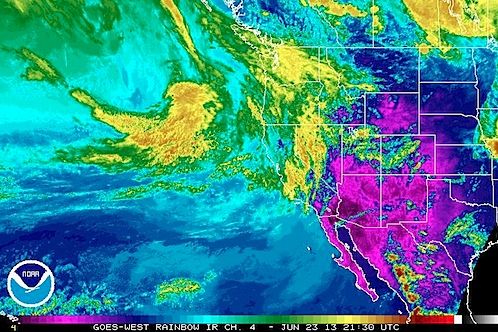 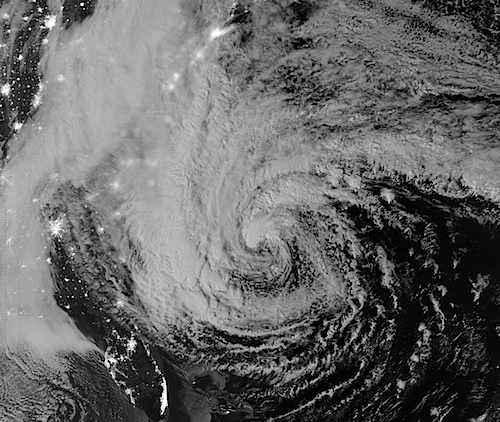 I was just visiting one of my favorite news picture sites, The Atlantic's In Focus blog, and came across this storm image. The caption reads: "This nighttime satellite image of Hurricane Sandy was acquired by the Visible Infrared Imaging Radiometer Suite (VIIRS) on the Suomi NPP satellite around 2:42 a.m. Eastern Daylight Time, on October 28, 2012. (Suomi NPP, NASA, NOAA)."

I never cease to wonder at the beauty of these images captured from space, even when they're images of a phenomenon that we experience as unimaginable power and violence when it comes ashore.

In Focus: Hurricane Sandy in Photos

In Focus: Hurricane Sandy After Landfall 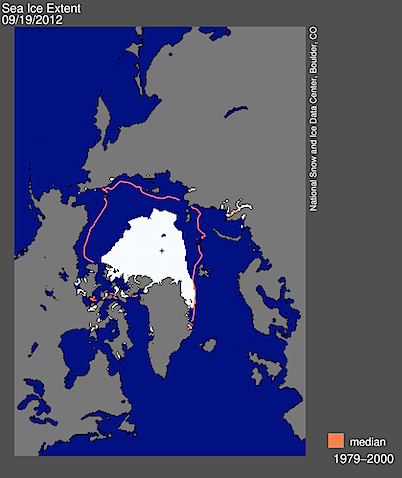 One of the Tweet-worthy current events items I've come across in the last couple of days is news that climate scientists say the Arctic ice pack has reached its lowest extent since the satellite records began in 1979. The National Snow and Ice Data Center at the University of Colorado says the Arctic sea ice appears to have reached a season minimum this past Sunday, September 16, of 3.41 million square kilometers (1.32 million square miles). That's half the average seen in the years 1979-2000 (and above, that's a graphic from the NSIDC showing the sea ice extent for September 19).

What does it mean? Here's a decent summary of the basic thinking from today's PBS NewsHour:

The ice is younger and thinner than it was in the 1980s. Of the ice surveyed this summer, the majority was one to two years old and three to five feet thick on average. That's down from 10 to 13 feet thick in 1985.

Losing sea ice also has immediate impacts on Arctic wildlife. Walruses that normally rest on the ice while hunting ocean fish moved ashore by the thousands last year. Arctic seal populations have already declined as a result of disappearing ice. And a 2009 United States Geological Survey estimated that by 2050, the world could lose two-thirds of its polar bears as their ice-dwelling food sources disappear. The ice is also home to delicate microorganisms, which, if lost, could upset the entire Arctic food chain, Meier said.

Ted Scambos, senior research scientist at NSIDC, said that changes in the Arctic's ice and snow are making the Arctic warmer, which may mean major weather and climate changes for the rest of the planet. Sea ice reflects the sun's rays, which helps regulate the planet's temperatures, especially during the summer. Losing the reflective ice surface causes temperatures to rise. If the North Pole is not as cold as it used to be, that has the potential to change wind and weather patterns throughout the Northern Hemisphere.

"But a wider impact may come from the increased heat and moisture that the Arctic is adding to the climate system," Scambos said in a press release yesterday. "This will gradually affect climate in the areas where we live...We have a less polar pole--and so there will be more variations and extremes."

Having read some of the accounts of the sea ice retreat yesterday, I went looking for images of what the Arctic looks like. A favorite resource: NASA, which publishes a bunch of cool images of various Earth features every day. One of the services, called MODIS(MODerate Resolution Imaging Spectroradiometer), includes daily mosaics of the Arctic snapped by NASA satellites. Every time I see these images of Earth from space, the thought that seizes me--or maybe it's more of an emotion--is what an incredibly beautiful place this planet is.

Looking at the Arctic day to day, I wondered whether I could turn the images into a "movie." Well, I could, sort of. I downloaded 185 days worth--from March 20 through September 20--then turned them into a slideshow, saved that as a movie, and uploaded it to YouTube. Here it is:

I will say up front that while the view is breathtaking, the Arctic weather screens the view of precisely what's happening with the ice. It's not as stark as you might expect (and of course, this is just one season we're looking at; there's nothing here to give a comparison to how this scene unfolded 30 years ago).
One note of orientation and explanation: The North Pole is near dead center in the images. Greenland is clearly recognizable at the lower left; Iceland is at the lower center, and Scandinavia and the northern coast of Russia are at the lower right. Siberia dominates the right side of the map (these images show weeks of heavy smoke from fires there). At the top margin, the Bering Strait, where Siberia nearly meets Alaska, is just left of center. Alaska appears inverted at the left, with the Gulf of Alaska at the top left corner.

A Round Thing Out There in Space 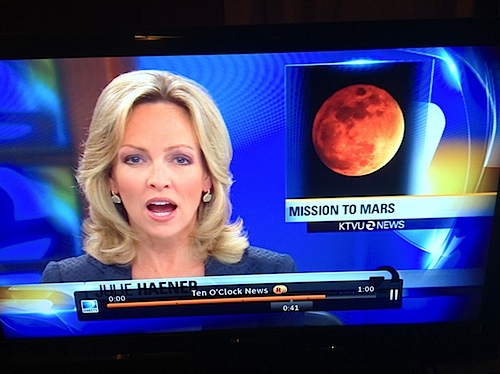 KTVU ("There's Only One 2") News is very excited about NASA's upcoming landing attempt on Mars. It did a little item on the Curiosity mission a couple nights ago. The graphic accompanying the piece was attention-getting. Never has the Red Planet looked so ... moon-like. That's because instead of using an image of Mars, whoever produced the graphic used a picture of Earth's moon during an eclipse. Hey--it's a round thing out there in space, and it looks red. Isn't that close enough? (See this image for a comparison to the one in the graphic. Below is a 2001 Hubble Space Telescope picture of Mars, one of thousands of Mars images available from NASA. And yes--you're allowed to ask whether I don't have anything better to do with my time.) 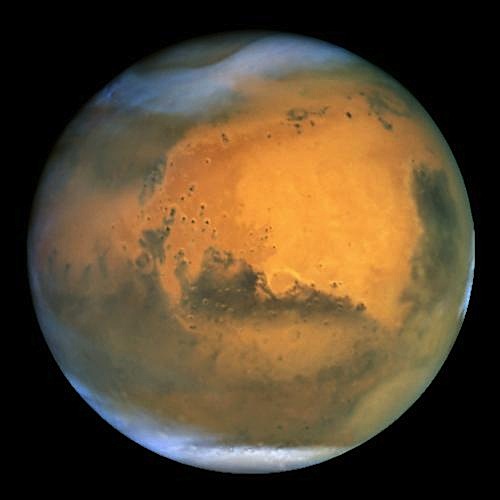 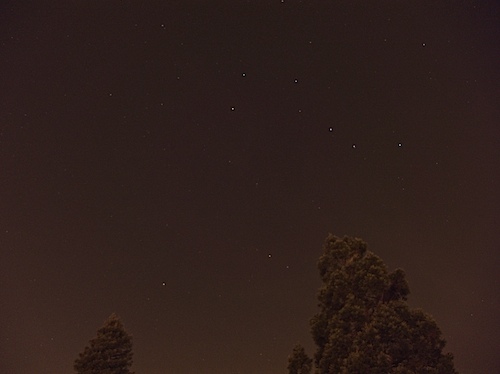 Kate and I got up at 3:26 a.m. -- that's what the clock said -- to see if we could get an eyeful of the Quadrantid meteor shower last night. (Why so late/early? It was after moonset here, and meteor visibility would be better.) We each saw one pretty good streak before crawling back into bed. Of course, I stayed out for half an hour hoping to get one on camera--and in fact the one I saw flashed by while the lens was open, but it was outside the frame. In any case I got a couple of OK star shots, including this one of the Big Dipper, which was virtually overhead; Polaris, the North Star, is just above and to the right of the tree on the left.

We've been having a string of clear evenings in the Bay Area, perfect for watching the nightly fly-by of the International Space Station and the shuttle Atlantis. When the shuttle and the station are docked, they appear as a single, bright star moving from (roughly) west to east. The Atlantis undocked early this morning and rapidly moved away from the station. This evening one of the ships appeared in the northwest, then the other--the space station trailed by the shuttle, I think. From San Francisco, they seemed to move nearly straight overhead, then rapidly vanished into the Earth's shadow when they were still high above the horizon.

It always surprises me a little not to see others out staring at these objects as they pass over, or that passers-by don't ask what I'm looking at. A big-city rule, I guess: avoid the harmless-looking guy staring into the sky just in case he's a lunatic. One time, a co-worker happened upon me watching the space station go over a nearby park. "What happened?" she asked. "Did a bird shit on you?" I told her about the space station and pointed at it. She glanced toward the sky, gave me a look that said she didn't quite believe anything like that was up there at the moment, and moved on.

Tonight in Berkeley, meantime: Kate knew the twin apparitions of space station and shuttle would become visible at 6:22. She called several neighbors to alert them. While I watched from the lower western edge of Potrero Hill, she had nearly a dozen people out in the street here in our neighborhood for the three-minute show. That's just one of the things I love about this block: that people will come out to see a night-time sky display--lunar eclipses, comets, meteor showers, whatever's on tap--and just hang out for a few minutes. 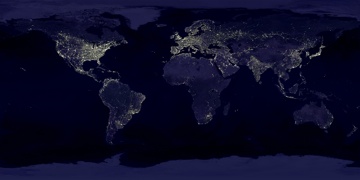 By way of an Open Salon blog: a recent composite view of the Earth at night, courtesy of NASA (click for bigger images). There's lots to reflect on here. For example: Look at the Korean peninsula, and check out the difference between South and North (for more on night-time lighting in North Korea, see this).

In six minutes -- no, five! four! -- something will click into place somewhere out there in the big celestial machine and we in the Northern Hemisphere will be at summer solstice. Get out and enjoy that daylight, everyone. ...

And then later: The space station and space shuttle went overheard at quarter to 10 tonight, with the solstice twilight still bright. This (below) is the shuttle, which trailed the space station by about a minute (at least 300 miles, I figure). Both flew right through the Big Dipper. Great Bear Transit. 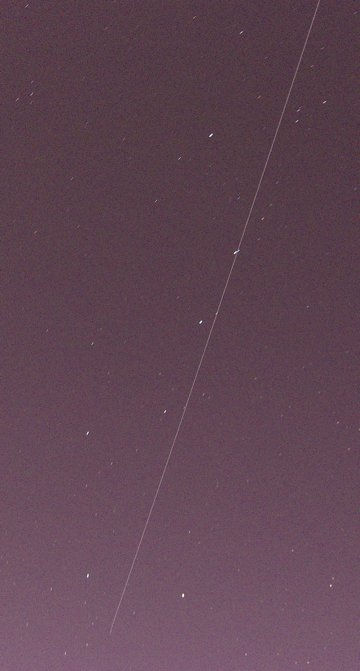 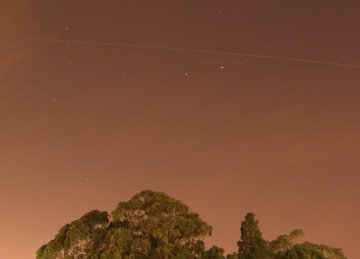 As I just wrote to my brother John;

"... I wasn't so lucky with the pictures last night. It

started clouding up about an hour before sunset, and
the space station and ISS were crossing well to the
north (maximum elevation was about 27 degrees). So it
was doubtful they'd be as bright even if they were
visible. At the scheduled time -- the shuttle was
supposed to appear at 6:03, the ISS at 6:04 -- I
couldn't see anything, but I released the shutter
anyway. After about 30 seconds, I could see something
moving dimly above the clouds in the northwest. After
the first 60-second shot, I reaimed the camera further
east, and realized there were two objects moving by; I
had missed the first, the shuttle, but both were
clearly visible as they crossed through the north to
the northeast. I tried another 60-second shot and got
both of them, though they don't look nearly as bright
as they did just looking at them. Looking at the shots
now, there was so much ambient light that the sky
became very washed out, and a shorter exposure might
have shown them better Something to remember for next
time.

"Still -- pretty amazing stuff. I was seeing them about
four hours after they had separated; if you assume
they were exactly a minute apart, that means the
distance between them was just under 300 miles (the
distance they travel in 60 seconds at 17,500 mph).
Looks like it will be too cloudy here to see the
shuttle again before it lands."