Page 2 of The New York Times print edition -- also online under the title Corrections -- is a favorite of mine. The conceit of the corrections page is that the paper will make an accounting for the errors that have appeared in its columns.

On one level, it's refreshing to see an institution as august as the Times owning up to its mistakes. On another, knowing how easy it is to err when trying to commit decent journalism, there's a little bit of Schadenfreude in seeing the dumb stuff that winds up in a paper that takes itself so seriously.

On a deeper plane, it's not possible for a corrections page to address deeper editorial and journalistic flaws -- the biases that all editors and publications have and the assumptions and coverage decisions they all make that tend to warp and distort what they say they're trying to capture -- truth and reality. That's something the paper's public editor (and ombudsmen in other organizations) are supposed to examine, though that's mission with a loud conflict of interest

Let's not let deep thoughts get in the way of fun, though. Most corrections you find are trivial. One I see in the Times today points out that they made a mistake in the spelling of a Norwegian city last Sunday. Another says that the paper got the location of a novelist's high school wrong. Big deal -- but thanks for pointing out the mistakes and making the fixes. I like the fact the Times foregoes the faux apologetic, "We regret the error."

Back at The San Francisco Examiner, the Monarch of the Dailies when it was published by the heirs of William Randolph Hearst and their hired hands, once published a story that mentioned two sons of the city's former mayor, Joseph Alioto. The sons, both attorneys, were named Joseph Alioto Jr. and John Alioto. The story was accompanied by a picture of one of them -- I can't remember which. The caption misidentified who was in the picture -- calling John "Joseph" or Joseph "John." The Aliotos complained. The Examiner duly published a correction with a substitute picture and a caption. Sure enough, the picture was of the other son, but the caption again misstated who was in the picture. The Examiner regretted the error -- twice.

This comes to mind because of a correction the Times ran yesterday (Saturday, April 11):

An article on Friday about the 150th anniversary of the end of the Civil War misstated the name of a song played by a brass band during a program at Arlington National Ceremony marking the date. It is “Yankee Doodle” — not “Yankee Doodle Dandy,” the name of a 1942 musical film about the composer George M. Cohan. 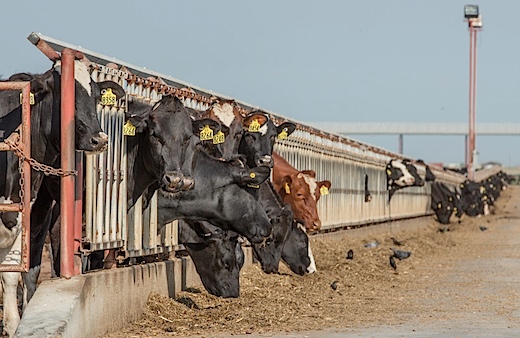 It's far too late, or early -- the end of March has turned into April Fool's Day -- to go into detail about what's pictured here. Suffice it to say: One of the many feedlots I passed Tuesday afternoon while tooling along the back roads of Merced and Madera and Fresno counties on the way to Pine Flat Lake. As usual, I took my time with scenes like this and so when I finally got to the lake -- one of the 10 biggest reservoirs in the state -- twilight was coming on.

Anyway. The cows/cattle were beautiful, and I told them so. I kept thinking someone was going to show up to shoo me away from taking pictures, accuse me of being an animal sympathizer or such like. Nothing like that happened.