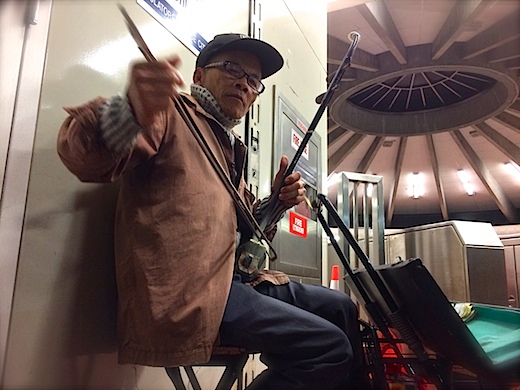 I've been seeing this man at the North Berkeley BART station for, gosh, at least a couple of years (time flies when you're halfway paying attention). He's one of a number of musicians who show up and perform for a few spare bucks during the evening commute. He plays a two-stringed instrument that I've always guessed is from eastern Asia, and I've always guessed that he's Vietnamese.

I wouldn't consider the guesses well-informed. Maybe sometime in the distant past I saw this instrument played somewhere and learned its origins. In any case, when I played the audio above for Kate and described what made it, she went online and quickly found a description of a two-string Vietnamese "fiddle" -- the dan nhi.

I wanted to ask the man, who was wearing a Raiders cap, about himself, the instrument and his playing, which I found quite beautiful. But our conversation was very brief. When I asked whether he's speak to me, he pointed to one of his ears and said, "I -- no English."