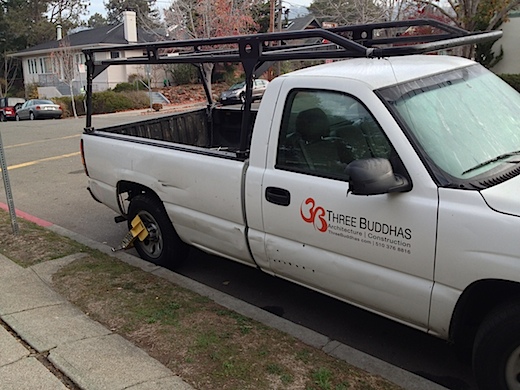 The corner of Josephine and Berryman streets in Berkeley. The Three Buddhas pickup is one we see parked in the neighborhood, and in fact the firm seems to have had a very long-running remodeling job going on around the corner from where the picture was taken. I've seen cars booted by the half-dozen in Chicago, but rarely here in Berkeley. Given the general laxity regarding parking in most residential neighborhoods here -- I've had a cop refuse to ticket someone who had parked partway across my driveway on the grounds that it was still possible to get a vehicle past it -- I always wonder what someone had to do to wind up with their wheels locked. Probably, they've picked up tickets in some of the commercial districts where enforcement has been known to be on the zealous side. (Credit for the headline goes to Kate Gallagher.) 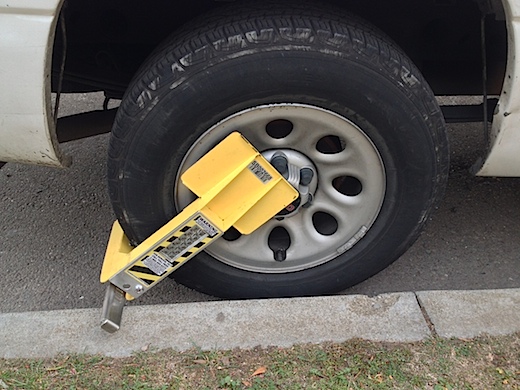 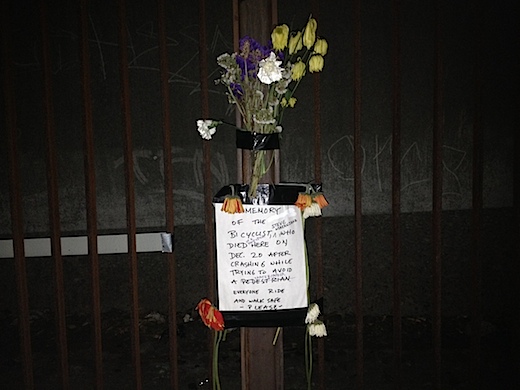 Out with The Dog this evening, walking along a bike path not too far from the house, I was startled to see what looked like a memorial: lots of flowers next to the barrier that separates the path from the BART tracks just north of the mouth of the Berkeley tunnel. Funny how fast I started processing possibilities: Was someone waylaid here? Had someone gone over the barrier and gotten electrocuted or hit by a train?

In the dark, I could see there was a sign. Shining a light on it, I found it said someone died 10 days ago in a cycling accident at this spot, just off the dead end of Neilson Street, just south of Gilman. Looking more carefully, I could see that the message had been edited to add details about the incident, including the name of the man who died and the fact he suffered "a heart attack" after an incident in which he apparently tried to avoid hitting someone else on the path.

Looking for the name online, I see a couple of accounts with more details. Stefano (Steve) Maranzana, a 39-year-old UC Berkeley employee, suffered cardiac arrest after he swerved to avoid a skateboarder on the path and crashed into the BART fence. Yeah -- 39, with a child on the way, if the news accounts are correct. On his way home from work, just a mile or two north of this site. (Here's one story, from Charles Burress on the Albany Patch site, and an obituary in The Daily Californian.)

I have to say there's something about the edits to the sign that seems to go just a little beyond providing an update -- like someone suggesting that the original is ill informed (as opposed to less informed). Also, what's the whited-out portion about? I'm probably reading too much into it.

In any case, from what I read about Steve Maranzana, he was a thoroughly good guy and probably would have appreciated the original sentiment. Take care, everyone. 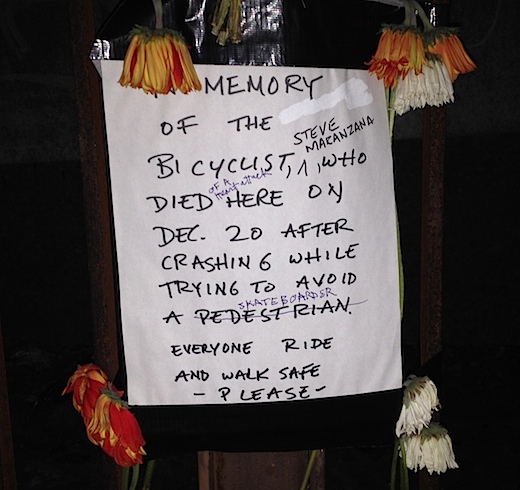 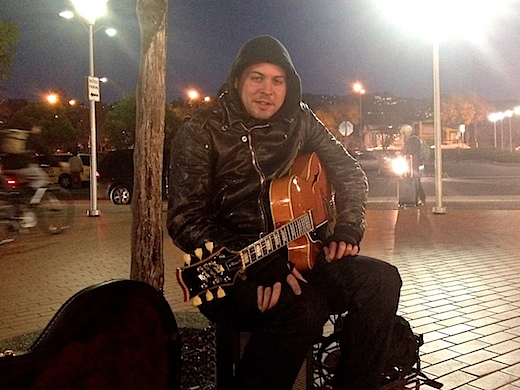 Up above, that's Dave Gardner -- I'm not sure I've got his last name right -- sitting on his amplifier and playing guitar as commuters emerged from the North Berkley BART station last night. I asked him how things were going. "Cold," he said. Were people responding to his playing, "Some," he said. Mostly, he let his playing speak for him, and I got out of the way so I wouldn't deter any passers-by from dropping a buck in his guitar case. I liked the music. I think the two numbers he plays here are takes on "All of Me" and "Sweet Georgia Brown."

Not So Long Ago 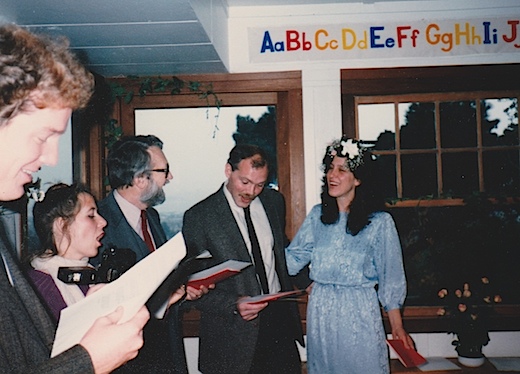 A long time ago in a galaxy far, far away…

Well, It was actually 28 years ago today, a rainy Sunday afternoon in the Berkeley Hills. Kate and I got married at the preschool where she was working at the time -- that's why the alphabet is on the wall. My mom and dad and my son Eamon were there and a bunch of our best friends: Trapper Byrne, at the left edge of the picture here, worked with Kate and I at the Daily Cal (he's still going, now as deputy metro editor, I think, at the San Francisco Chronicle). Ursula Stehle is next to him, a close friend since the time our older kids were born; her husband, Larry HIckey, did a reading during our brief ceremony. Beyond Ursula is Bruce Hilton, a news desk colleague of mine from The San Francisco Examiner who was also an ordained Methodist minister and who agreed to officiate once he was satisfied Kate and I were serious about the adventure we were undertaking. Outside the frame of the picture and not yet mentioned were Bill Joyce, whom we had gotten to know through Larry and Ursula; Robin Woods and Jim Tronoff, who have long since decamped to Ripon, Wisconsin; Trapper's wife, Judy Wong; George Paolini and Jane Paulsen, newspaper friends of mine from Alameda who now live in Carmel or someplace south and west of here; and Vicki and Ross Carlton and their daughter Cedar, who hosted our celebration (it was Vicki's preschool). It's been too long since I've seen most of these folks.

At the moment the picture was taken, we were singing a funny song that Bill had written for the occasion to the tune of the Irish song "Haul Away, Joe." I don't have the lyrics at hand, but it was about me losing my independence. Or something like that. I still have the jacket I wore that day. It's a tight fit, and I haven't worn it in years. But the typewritten vows I read that day are still inside the left inside pocket, just where they were that day, not so long ago or far away.