Hey, Is That a Full Moon? 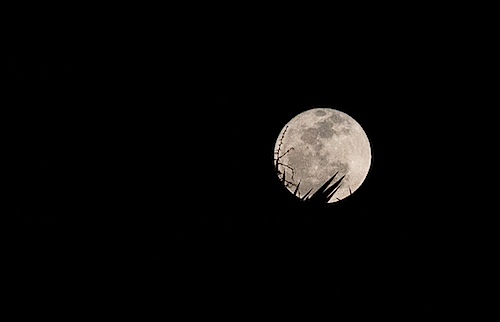 It is alleged to be a "snow moon" tonight--the February full moon. I have been sheltered or culturally straitened, because I don't recall hearing that term before today, or "harvest moon" or "hunter's moon" or any of the rest of the names I hear used to describe the full moons of various seasons in are mostly indoor-dwelling, non-harvesting, non-hunting society.

In the suburbs where I did my first conscious moon-viewing, it was always, "Hey, it's a full moon," twelve months out of twelve. Then inside to see what was on the TV. If snow lay on the ground, a circumstance that might coincide with any moon between October and April, that could be a snow moon. Or a thaw moon. Or an wind chill moon. Or a balmy out-of-season moon. Or a do you want to go for a walk? moon.

But again, more likely would be: "Is the moon full tonight?" The question giving way to speculation and giving license to throw around terms like gibbous and waxing and waning and opposition.

The moon name I've run across for this second-month moon, this late northern winter moon, the sobriquet that rings with some meaning is "hunger moon." Yes, I can understand that. Snow could come any time after the final harvest or after the game became scarce with the cold. But by this time, within shouting distance of the turning of the season, you can imagine hunger tightening its grip as larders emptied and rations grew short. Let us please hang on till our food returns.

A little earlier this month, I wrote something about being preoccupied by a small database project on Oakland's homicides from last year. I should use the word "small" advisedly. Even though homicides represent a small slice of Oakland's overall crime for 2012--the 500 or so shootings, the 2,200 other assaults, the 214 rapes, the 4,126 robberies, the 12,549 burglaries, the 7,020 stolen vehicles, the 6,006 larcenies--violent death casts a uniquely dark shadow across a community and robs it of any sense of security.

That's the abstract level. On a more personal level, I wanted to gather as much information as I could on who had died, how they had died, and the aftermath of the deaths. That meant going from the Oakland Police Department's often incomplete daily spreadsheets, which note times and locations of reported homicides, to media accounts that have the identities of victims. This is far from a novel project, unfortunately; the Oakland Tribune has been doing profiles on all the city's homicide victims for the last several years (in fact, when I hit a dead end on finding names in several of these case, the Oakland police suggested we check the Trib's year-end wrap-up, which had yet to be published). Back in the mid-90s, I edited a long series of stories at The San Francisco Examiner in which we tried to do a personal profile of every San Francisco homicide victim for a calendar year (we had reporters chasing after homicide investigators for details in more than 100 cases, I think; I was even less popular than usual among the reporters). Many news organizations have undertaken similar enterprises. The common thread in all of these projects, I think, is an attempt to humanize the people lost in the statistics.

As I wrote earlier, one pattern that emerged pretty early looking at all these cases was how relatively seldom anyone was arrested in the killing (at KQED News, we did a story last week that took a quick look at the most obvious reasons for the low arrest rate: lack of police resources, an underfunded crime lab, and, most important, the fact many people in the neighborhoods suffering the most from the plague of violence simply don't trust the police).

For that story, we turned my homicide database into a map (below). You can click on the dots for the basic details of every death. Red dots show homicides that have not yet been solved. Green dots show cases that have been "cleared"--which means someone's been arrested and charged. Yellow dots are cases ruled to be justifiable homicide. The single blue dot is for an officer-involved shooting also ruled to be justifiable homicide.

I'm trying to do a little project before the year gets too old: publish my dad's 1930 diary, which his mom forced him to keep when the family traveled out to California, alongside my journal of my first trip out West, including California, in 1973. (When I say "publish," I'm mostly talking about uploading scans to this here blog.)

Anyway, I started to look at what I was writing 40 years ago as I hitch-hiked down the coast in February from Vancouver. One thing I had kind of forgotten: I'd gotten it into my head that I ought to try to write down notable conversations I had with people along the way. And I see stuff in there now featuring rides and people I honestly don't recall. There's a good example near the beginning of my trip.

On January 31, I took the ferry from Vancouver to Victoria to Port Angeles, Washington. On February 1, I headed down the coast via U.S.101 West. Here's part of the entry at the end of that day (and yes, this is just how I wrote it down):

"I met some interesting people today while hitch-hiking. A logging truck driver who picked me up in Port Angeles, a Washington State geology grad, a mother of two from Quinault who related the details of relatives' mill accidents:

" 'My husband got his hand caught in a chain, and it ground his fingers up good; he lost one, and has to hold his hand like this (she held her hand up in a clawed position)

" 'And my brother in law, he was sawing shakers at a mill and cut right up the middle of his index finger--to the second joint--but his hand is perfectly all right.

" 'He's only 18, but last year, he crashed his car down a thousand foot embankment. The car, it was a brand new Super Bee, hit the embankment twenty times on the way. And he got a bruise on his forehead.' "

"One of her little girls said: 'Daddy's finger is growing back.'

" 'No, Shelley,' the mother replied. 'Once you lose a finger, it doesn't grow back.'

" 'But I don't want daddy's finger to look like that forever,' Shelley said (she was about five).

" 'But the bones in it were too smashed up honey, and they couldn't fix it.' "

Those folks dropped me off somewhere along the road. I can't say where, exactly. What I do remember is how wet it was on the coast of the Olympic Peninsula and how dense the forests seemed. And banana slugs--I think I saw one that day for the first time. I remember ending up the day in a little state park in the southwestern corner of the state, how gray it seemed, how early darkness came, and how much I missed being at home with my family and friends close by.

So, here I am in 2013. What I'm wondering to myself is whether I listen as carefully now as I did for a few minutes back then. 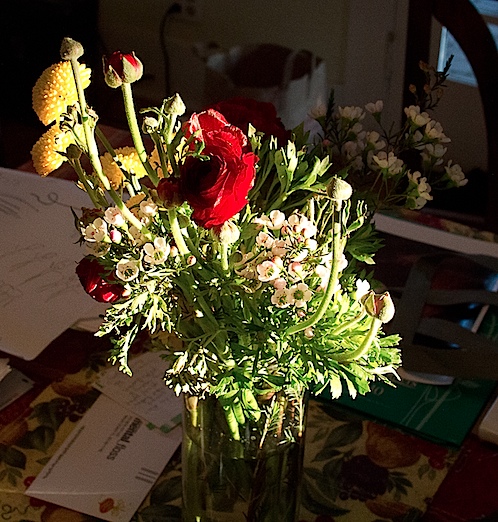 The late afternoon sun angles in and lights up a Valentine's bouquet, with some of the detritus of the modern dining-room table in the background.

Today was warm--a good day to reap the winter's bounteous harvest of weeds. And since we've only had about half an inch of rain since the first of the year (and none at all for the last three weeks), I watered today, too. The forecasters say their models show a storm moving down the coast on Tuesday, so maybe I was just priming the pump for some moisture from the skies.

(As to weather stats: Here's one meteorologist's day-by-day log of this season's rain--and the previous 52 seasons as well. The same forecaster, Jan Null, notes elsewhere on his site that since 1950, it's been the rule during Bay Area rainy season to have at least one prolonged dry spell in midwinter. The average he found was 19 days, with the shortest being eight and the longest--in the 2011-12 season--being 49. By Null's definition, our current dry spell has reached 24 days).

It's been an odd winter all around I guess, and maybe every winter is odd. I mean weather-wise. On the mild stretch of Pacific coast where I live, the rains came pretty much on schedule in the fall. At the end of November we had a very wet, very warm storm. The storms continued in December, though the weather cooled off. By Christmas, some locations had nearly double their average rainfall amounts for the date.

January arrived, and we moved into what's normally our rainiest time of year. But this time around, the storms started detouring north of California. Two or three little systems have brushed past. Until this week, the weather's been cold (by our standards) and clear. The past few days have been warm (by anyone's winter standards--temperatures in the upper 60s and 70s) and clear.

Overnight, the wind came up from the east and northeast. That means it's been flowing over the ranges of coast hills and mountains down to the bays and oceans. When that happens, the wind warms up (the apparent explanation: the air compresses and warms as it descends the faces of the hills Letting the dog out at 5:30 this morning, I stepped out into the backyard and felt how balmy the breeze felt, then went to check our thermometer. Sixty-one degrees.

Now the daylight is coming up. We've got an asteroid making a close pass later today. A meteorite came down someplace in Russia. Looks like a warm day ahead.

Clouds in My Coffee 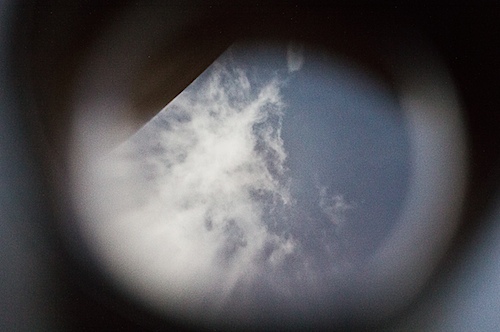 Where I've Been, What I'm Doing

So, the last two weekends I've found myself in the middle of a sort of intense project that's had me sitting on my butt in front of my computer, though not writing.

Here it is: We've had lots of talk in the Bay Area about the number of homicides in Oakland. You may have heard about all the killings in Chicago in 2012. Just over 500 in a city of 2.7 million. Oakland, with a shade under 400,000 residents, had right around 130 homicides (I've got reason to believe the number was slightly under-reported in Oakland; it depends, too, on how you count homicides ruled "justified"). That puts Oakland's homicides per 100,000 residents at 32 or so, compared to 19 for Chicago. (On a

So, I set out to finish a project I started early last year to keep tabs on the Oakland homicide data. I spent all day last Sunday and some of today (before a prominent televised sporting event) trying to come up with a list of everyone killed in the city in 2012, their names, ages, whether anyone was arrested for the killing, and stories pertinent to each victim and incident. More on this later. But for now, I'm uploading the spreadsheet below.

The most depressing thing to see here, beyond the number of lives taken, and the number of very young lives ended, is how many of these cases are unsolved (meaning no arrests have ever been made).