Mystery of the Middle-School Ballfield 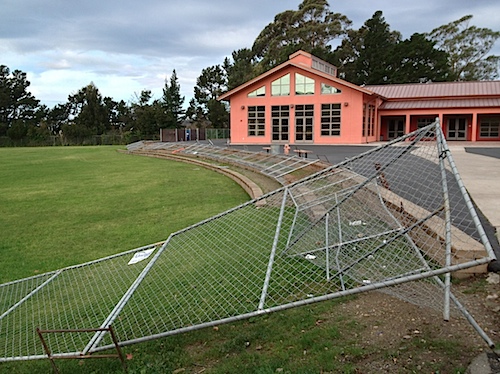 Early last summer, fences went up around the baseball field at King Middle School, a few blocks from us in North Berkeley. Soon, work started. The entire field was scraped clean and graded. It looked like new drainage was installed, and a brand-new sprinkler system went in.

The project seemed a little odd from the outset. It's true the old grass on the field was a little weedy. And drainage has never been great since the field was installed in the late '80s or early '90s. The right field corner got swampy during the winter rains. A couple years ago, water leaking from somewhere turned much of right field into an impromptu fen (though no one suggested the name Fenway). When the leak was fixed more than a year later, the accidental wetland went back to its earlier lawn-like state. The field was much as it always has been--not perfect, with a tangle of blackberry bushes along the left field foul line, but with nothing suggesting a major overhaul was needed.

But the field was closed and work commenced. After all the new drainage and irrigation was in place, the field was graded and seeded. It was evident that it would take well past the start of the school year before the grass would be well enough established to let the kids run around on it. My guess was early October, and we heard from a parent at the school that students had been told the field would be open by late October.

As it happened, one October evening before sunset I was able to get onto the field (with our dog) through a gap in the fence. I just wanted to see what the new turf felt like underfoot. I was surprised to find that large areas of the field beyond the old right-field problem area were very wet and soft. That was no doubt due to what appear to have been daily waterings--overwatering seems to be the rule in many Berkeley parks--but I guess I expected that with improved drainage that problem would have been addressed. Walking down to the field's left-field corner, where there's a grate over a drain, you could see the path water was taking to flow out of the field.

Long story short, the fences have remained around the field, and the field's as soggy as ever after a very wet autumn. The outfield grass has been cut several times, but parts of the field are marshy enough that the riding mowers have left muddy tracks in their wake. a few weeks ago, a particularly windy storm apparently blew down several sections of the fence; at this point, most of the fence is down, and there's been no visible attempt to either put it up again or remove it. It's been long enough since anyone regularly used the field that grass is taking root on the dirt infield. Swatches of new sod have appeared around the outfield in areas where the seeded grass wasn't flourishing.

So I guess the question is: what's going on here? For a project that seems like it was entirely optional to begin with, it seems to have gone on for a long time without any visible benefit, and it's removed a big piece of the campus open space from use. Yes, the kids will get their field back eventually, but I'm guessing in a year of so no one will know the difference between the old and new, improved versions.

Finally, I wonder how much the school district has spent on this. It's easy enough to find out that it's planning to spend about $1 million dollars to upgrade the track and field on campus--after years of back-and-forth with neighbors and runners, the district's planning to install an all-weather track next summer to replace the existing clay and cinder oval--I haven't dug far enough into the school board's old agendas and minutes to find out how much money has gone into the baseball field. 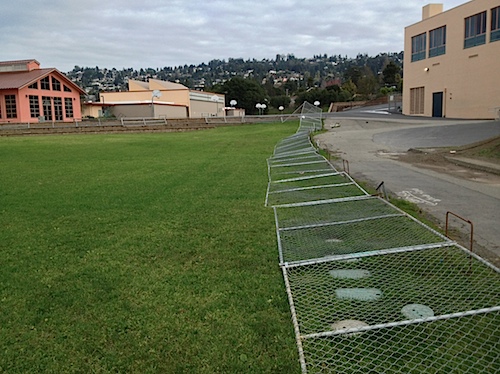 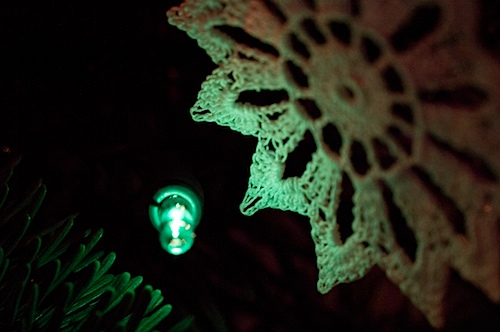 The closing lines of "A Child's Christmas in Wales." My favorite part of one of my favorite poems. Merry Christmas, wherever you are on this Christmas night.

"... Always on Christmas night there was music.
An uncle played the fiddle, a cousin sang
'Cherry Ripe,' and another uncle sang 'Drake's Drum.'
It was very warm in the little house.
Auntie Hannah, who had got on to the parsnip
wine, sang a song about Bleeding Hearts and Death,
and then another in which she said her heart
was like a Bird's Nest; and then everybody
laughed again; and then I went to bed.

"Looking out my bedroom window, out into
the moonlight and the unending smoke-colored snow,
I could see the lights in the windows
of all the other houses on our hill and hear
the music rising from them up the long, steadily
falling night. I turned the gas down, I got
into bed. I said some words to the close and
holy darkness, and then I slept." 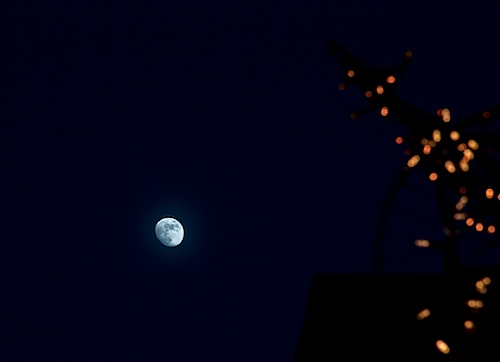 Somewhere out there on the flatland streets, the luminaria squads are at work. I heard them earlier when I was up on the roof--kids shouting as they went up and down the blocks of nearby streets, distributing paper bags, poured sand into them, and put a candle into each one to light after it gets dark (that would be about now).

I was up on the roof to install my homemade Xmas Star, which one former neighbor last year correctly said "looks suspiciously like a cross." (Why a cross is suspicious, I don't know.) Anyway, it's up there now, strapped onto the chimney with some hanger wire. After dark, the moon rose, creating the opportunity for a juxtaposition of heavenly and earthly lights. I don't casually pass up such opportunities.

Above, the moon takes top billing to the underexposed star lights. Below, they're a little more evenly matched. And yes, the frame for my star is an old bicycle wheel. 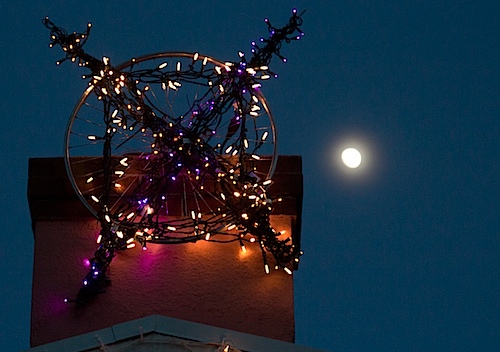 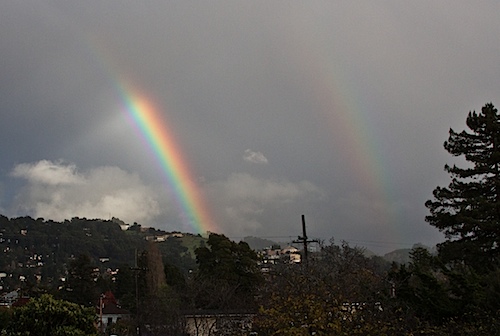 This holiday that's coming? It's been sneaking up on us. The main event in our lives day to day--work, and it seems to start before dawn and continue until bedtime. Even then, it's not finished, but just suspended until the bell rings at the other end of a short sleep.

So today, I pulled out Christmas lights to start hanging them. I have been partial to those strings that have the strands that hang down from the gutters--icicle lights, I guess they're called. Putting them up requires a trip up to the roof, after I untangle everything I thought I put away so carefully last year. Then I have to scoot and crawl along the edge of the eaves, hooking plastic clips onto the gutters and flashing and stringing the lights through clips.

Today's light-hanging extravaganza took place a little while after a heavy but brief rain shower. Looking east after I climbed onto the roof, the sunlight was refracted in a curtain of rain blowing up into the hills. We didn't get a rainbow, exactly--just the righthand leg of one bending up into the clouds, with a faint double. I grabbed my camera, snapped a few frames, and the lightshow faded in just a few minutes. Then I went back and hung the lights. They were on tonight when the next heavy burst of rain moved in.

After the Shooting's Over, How to Protect the Kids

We had a short-lived debate in our public-radio newsroom this afternoon on whether it's wise to advise parents to "turn off the TV" to shield their children from unfiltered news of today's school slaughter--at least until mom and dad can figure out what they're going to say and sit down with the kids to discuss the terrible event.

It wouldn't have been a debate except for me expressing the apparently way-out view that it's inappropriate to try to shelter the kids from the news. First, everyone the kids know is already talking about what happened today, and they're very savvy about finding and sharing information. Of course, it is a good idea to try to talk to them and be attentive to the emotions they express (or may find it hard to express) today and in the weeks and months to come.

But I also wonder what it is we think we're protecting them from. Is it the horrible act of violence we've witnessed today?

My generation grew up with unfiltered views of one nation-altering assassination after another, not to mention intimate and graphic views of the Vietnam War. Occasionally, our parents would talk to us about what we were seeing. What spoke most eloquently to me, though, was seeing how they reacted to these tragedies as they unfolded. I remember a close family friend, a newspaper editor in Chicago, weeping the evening Bobby Kennedy died. That said more to me about the nature and the import of the event than any carefully framed message ever could have.

It also meant something that my parents and some others in the neighborhood each tried in smaller or larger ways to change what they saw happening around them. That wasn't part of a carefully crafted lesson for us kids, either. They felt something was wrong--with the war, for instance, or the fact that families in a nearby town were living in converted boxcars--and decided to march or volunteer. Again, that told us a lot more the world we lived in (and about them) than anything they could have said. Thinking about it now, maybe I wish more of what they were doing had rubbed off on me.

And that gets to the heart of what I find most disturbing about today. Perhaps this horror will shake us out of our collective complacency and acceptance of this particular kind of crime. Maybe there will be a "One Million Parent March" and we'll take some effective steps to limit the sale of weapons to the deranged and enraged. But how many of us really expect that?

I say let the kids see the TV news, and watch it with them. The news we mustn't let them hear is that the adults they depend on let today happen and don't have any plan to prevent the next tragedy.

An immortal household exchange from the distant past:

Kate to one of the kids: I can't play right now. I'm not here just to entertain you.

Kid: Why are you here, then?