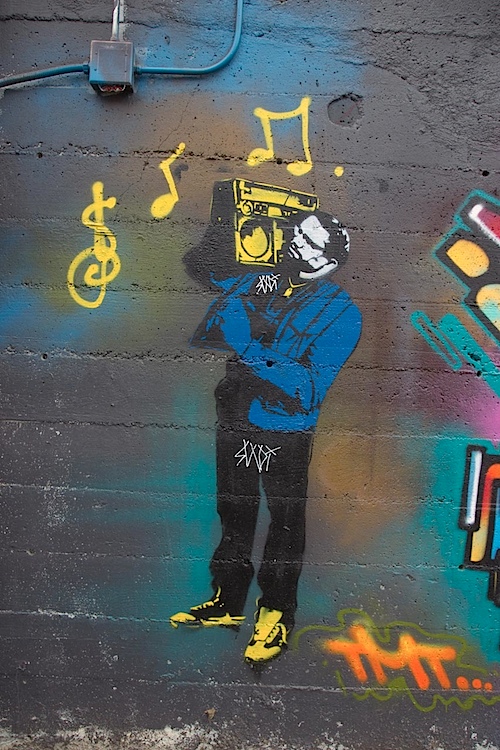 In West Oakland for a news story yesterday (our state senator was promoting her bill to create a statewide mattress recycling system--there are a lot of them left on the streets there), the strong secondary attraction was the graffiti wall running south from 25th and Willow streets. This is a small detail. But a good one. 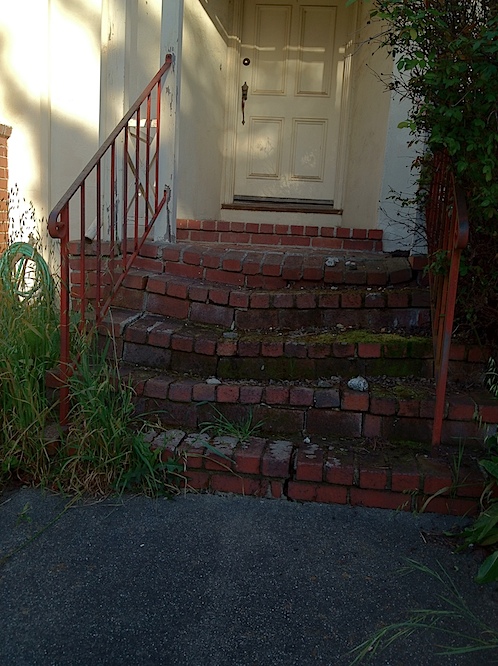 "There's a house on my block that's abandoned and cold,
The folks moved out of it a long time ago,
And they took all their things and they never came back,
It looks like it's haunted with the windows all black,
Everybody calls it the house, the house where nobody lives.

"Once it held laughter,
Once it held dreams.
Did they throw them away,
Did they know what it means?
Did someone's heart break,
Or did someone do somebody wrong?

"The paint is all cracked, it was peeled off of the wood.
The papers were stacked on the porch where I stood.
The weeds had grown up just as high as the door.
There were birds in the chimney, an old chest of drawers.
It looks like no one will ever come back
To the house where nobody lives.

"Once it held laughter,
Once it held dreams.
Did they throw them away,
Did they know what it means?
Did someone's heart break,
Or did someone do somebody wrong?

"So if you find someone, someone to have, someone to hold,
Don't trade it for silver, oh don't trade it for gold.
Because I have all of life's treasures, and they're fine and they're good,
They remind me that houses are just made of wood.
What makes a house grand oh it ain't the roof or the doors,
If there's love in a house, it's a palace for sure.
Without love it ain't nothin' but a house, a house where nobody lives."

—Tom Waits, "House Where Nobody Lives" (from "The Mule Variations") 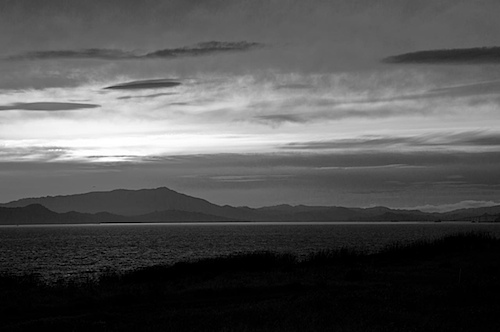 Mount Tamalpais from Cesar Chavez Park (also known as Berkeley's lovely reclaimed old garbarge dump). We wound up there the other night after walking the dog in our neighborhood. It looked like the sunset would be a show, and I said that to Kate when we got home. She said, "Let's go down to the marina." It was a great spontaneous moment, and we did it. 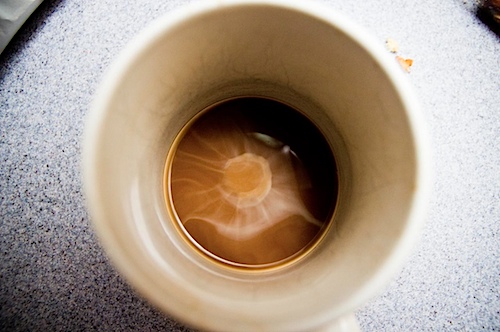 I have my coffee in the morning with a little half-and-half in it. I'll almost always drink more than a cup. I'll almost always leave a cup with maybe an inch of coffee in the bottom. I'll walked away and forget it as I get ready to walk the dog or begin my very roundabout preparationsto leave for work. I'll throw the cold coffee in the sink, rinse it away, and put the cup in the dishwasher. But occasionally, before I do that, I'll notice a pattern on the cold coffee's surface. The fat I've poured into the liquid (mostly fat, anyway), has arrayed itself into something of a star shape or maybe a coffee flower -- spokes radiating from a center. I feel certain that someone in some physics lab somewhere (or maybe someplace more humble, like a high school chemistry class) has explained this. I guess I need to go find that someone. 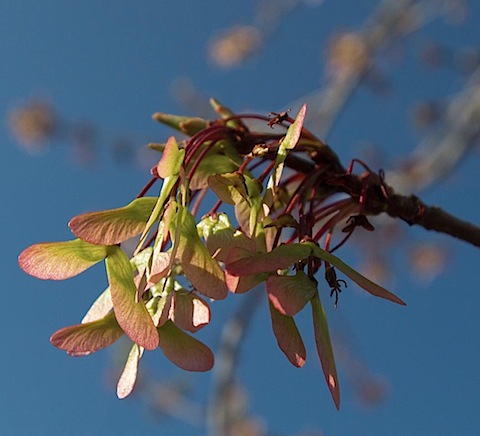 The neighboring maple. That's a mess of seeds waiting to helicopter down a little later in the year. In the background, the sky is a rain-scrubbed blue. The forecasters say the weather this week will turn warm (quite warm--in the upper 80s and 90s if you're well south and inland from the Bay Area). Our front-yard weed patch is just loving these conditions. 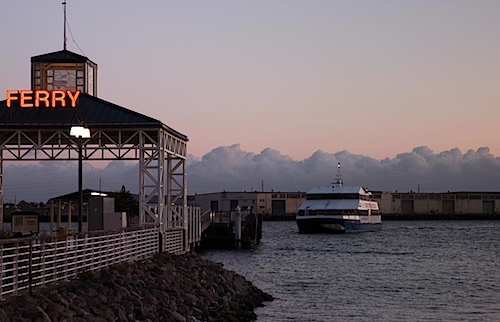 The Peralta (aka the ferry) pulls into the Jack London Square dock about 7:50 tonight. It cleared up today after all the rain of the last two or three days, but the clouds at sunset were dramatic. The ferry ride: on the chilly side for an April evening, especially after the wind came up on the return trip. If the A's had been playing a home game tonight, they might have had about 300 people in the stands.

Titanic on the Sea of Unawareness

Item: Some among us apparently are not aware that the story of the Titanic was a real, honest-to-goodness, true-life historical event as opposed to a James Cameron "King of the World" extravaganza. (The evidence: a string of Twitter posts from users expressing surprise that the Titanic existed outside movies. The list appears to be real. Checking the accounts of some of the Twitter users who appear there, some seem to concede that they were ignorant of the Titanic's existence (though some say they were in doubt about the reality of the love story depicted in the Cameron film). In fact, most of the people on the list have gotten pounded with responses pointing out how dumb they are.

But let us not be harsh. Let us say "credulous" or "unaware," not "dumb." Well, there's unaware, and then there's unaware. After all, we are the nation where:

As a service, we're offering a brief lists of people and events that have appeared in movies, both recent and classic, that historians say are real (as well as a few that are in fact apparently fictional):

End of Sunday, Rain to Come 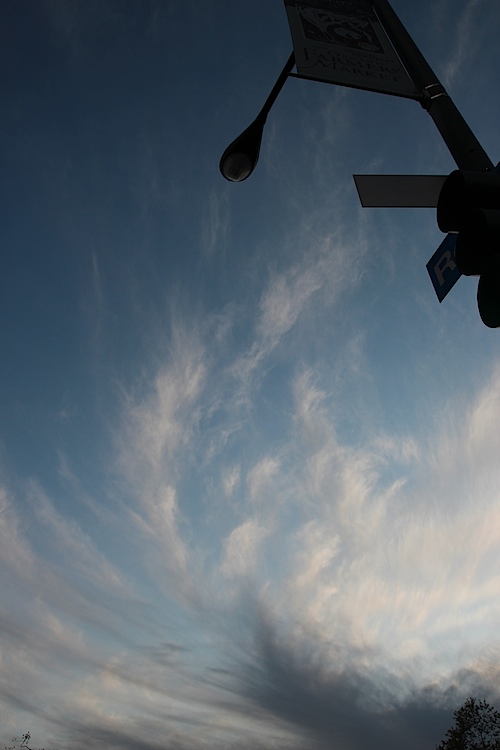 Sunday evening at Rose and Henry streets, North Berkeley, on our way back from a walk into the hills. The weather service describes these as "high clouds streaming over the forecast area ... associated with a low pressure system" over the Pacific seven or eight hundred miles to our northwest and headed our way. A wet week in April--not unusual but definitely welcome given our drier-than-normal winter. 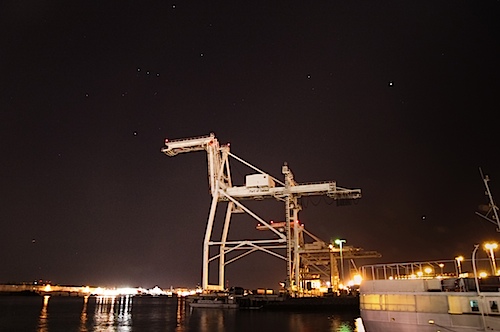 A crane at the Port of Oakland's Charles P. Howard Terminal, just west of the Jack London Square Ferry dock. We had just gotten off the boat after a roundtrip to San Francisco. I didn't expect to capture Orion, but there it (or he) is at the upper left. The bright star to the right is Venus, with the Pleiades dimly visible in the background. At bottom right is the stern of the Potomac, FDR's presidential yacht, which fetched up in the port after a colorful history involving Elvis Presley, drug runners, and the U.S. Customs Service.

On Capp Shotwell Street, an alley-like little street that runs down the east side of the Mission district in San Francisco. There's one block, between 16th and 17th streets, that always has some visual surprise despite the superficially bland surroundings (a health clinic and a few two-flat buildings on one side of the street and what looks like a garage or maintenance building on the other side). Up there, that's a window of the garage, as seen yesterday morning.