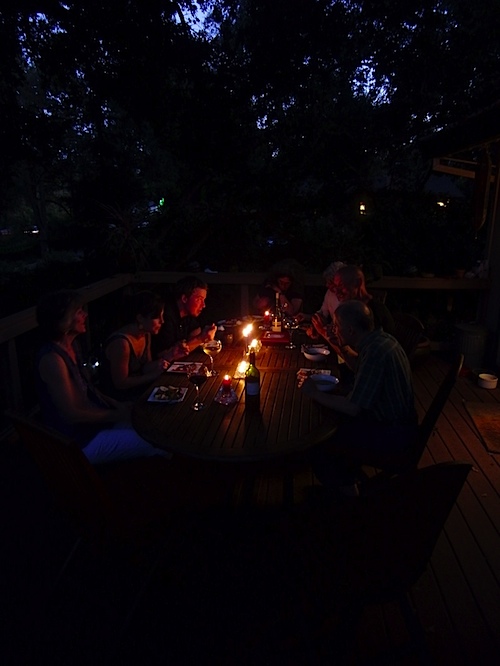 *Had planned a visit to the East Bay Municipal Utility District's fish hatchery, on the Mokelumne River northeast of Stockton. But other stuff intervened. We got up late and indulged in our long Saturday morning dog-walk routine. We were due in Fair Oaks, out at the very edge of the foothills on the American River east of Sacramento, to read poetry with friends early in the evening (the picture: dinner before the reading began). So the hatchery never happened.

**And then yesterday, I thought I might make an early start to beat the heat of the day and get out to that hatchery early. But we slept in, did our Sunday dog-walk routine, which is different from Saturday's, and found a football game on the tube (flat screen, actually) when we got home. We were due in the afternoon at a memorial for a friend who died this summer. I thought maybe I'd finish some take-home work from my Public Radio Job, too. Well, we made it to the memorial, anyway. Maybe the hatchery will happen next week. I'll be taking the take-home work back to the office.

***Birthdays: Saturday, my brother John (who's now reached the Double Nickel). (I meant to call.) Sunday, my niece Maddie. (I meant to send something out there, though belated gifts are good, too.) Today, Niko Danko, who I remember seeing the first weekend he was here on planet Earth. That was in 1999. Hard to believe the time has gone so fast. (See note about belated gifts.) Tomorrow -- my late identical-twin uncles, Tom and Ed, born in 1934. Still missed.

****You have got to love a poem that starts:
"my grandmother had a serious gas
problem."
It's from Charles Bukowksi, here. We did not read this on Saturday night.

*****You also have to love a poem, also from The Writer's Almanac, that compares the travails of modern office life with a Homeric bloodbath.

Yesterday, for instance, after the department meeting,
when I ended up losing my choice parking spot
behind the library to the new provost.

I slammed the door. I threw down my book bag
in this particular way I have perfected over the years
that lets my wife understand
the contempt I have for my enemies,
which is prodigious. And then with great skill
she built a gin and tonic
that would have pleased the very gods,
and with epic patience she listened
as I told her of my wrath, and of what I intended to do
to so-and-so, and also to what's-his-name. 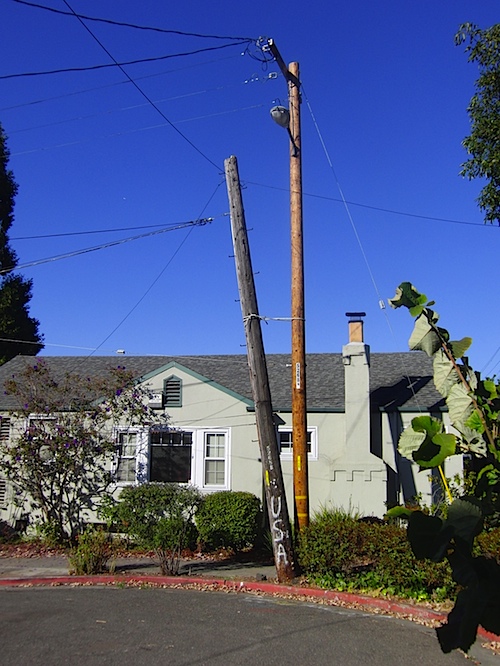 This probably happens everywhere: An old utility pole reaches the end of its useful life and gets replaced. There are several places in our neighborhood where an old pole has been splinted to a brand new one installed next to it. This one, on Short Street (a little stub of a lane just west of Sacramento Street; it runs between Hearst and Lincoln streets and is interrupted by the North Berkeley BART station), is unique. The old pole is loosely lashed to the new one. The old pole still carries power lines and maybe some phone and cable TV lines. It doesn't look like it would take much to knock it over. 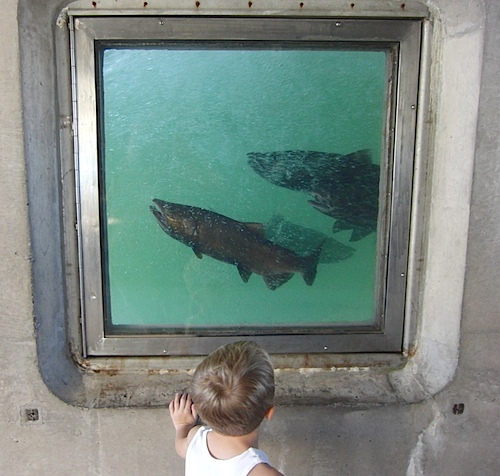 I read a press release from the state Department of Fish and Game last week that the hatchery up in Oroville, on the Feather River just below the big State Water Project dam, was about to open its gates to fall run chinook salmon and steelhead. Saturday we drove up there, 142 miles from Berkeley, to see what the show looked like. After several years of disappearing fall salmon runs, it was a thrill to see the fish coming up the ladder toward the hatchery. In the river at the bottom of the fishway--a low dam blocks the fish from going any further upstream--it seemed there were hundreds of salmon, maybe more, churning the water and leaping into the air. The ladder includes a below-grade viewing area so you can see the fish on their way up. We were there for two or three hours, and we saw a steady stream of people, including lots of families with kids, coming to check on the run. Very cool.

Still reporting the story, but watching the fish, one is seized with the feeling where there's life, there's hope for the salmon. (And yes, that feeling persists even knowing to what a huge degree humans are intervening in the process we're watching. A hatchery is really a kind of fish factory after all, though that's not entirely visible when you're watching the salmon progressing up the ladder. I've had a couple people ask me, "After they come up to the hatchery, what happens?" Well, technicians step in and harvest the roe and sperm from the fish and kill them in the process. For salmon, that's the same end result as the wild run--though vastly different in the details and perhaps the quality of fish that result. For now, in this place, the hatchery is all we have left to keep the run going. So a celebration is in order despite our heavy-handed intervention.) 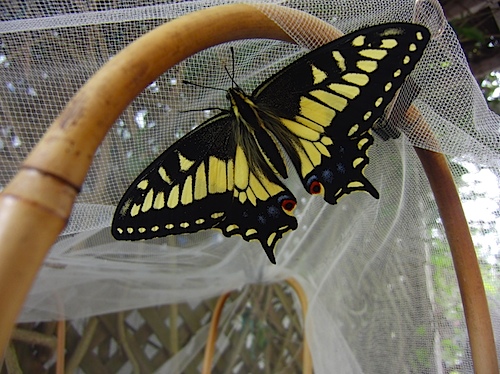 One of Kate's sideline projects the past couple of years--part of her elementary school science teaching--has been to raise anise swallowtail caterpillars to the point where they go into the chrysalis, then harbor the chrysalides until the butterflies emerge. It's not easy. We had a couple of chrysalides on the back porch that some predator--a bird, probably--came and picked off. After that, Kate improvised some netting to protect the five remaining caterpillars, which in due course changed to chrysalis form.

The last of them changed probably a month ago, and what we've had, first on the sometimes very warm back porch and then in a shadier spot in a side yard, is a green plastic box with some sticks in it that have had some dead-looking mummy-type things hanging from them. Honestly--when you look at these objects, it's a little hard to believe anything living can emerge from them. But we've been checking every morning anyway.

Yesterday, a surprise: a newly metamorphosed anise swallowtail butterfly, perched on one of the net-supporting hoops in the green box. We were headed out for the afternoon, but we lifted the netting to give it a chance to fly away when it was ready. When we got home, well after dark, it was gone. I'd like to think it got a chance to feed and perhaps eluded for a few hours anyway whatever out there in the world will look at it and see food. I'd like to think that it might find a like-minded anise swallowtail of the opposite sex and get a shot at perpetuating their kind. 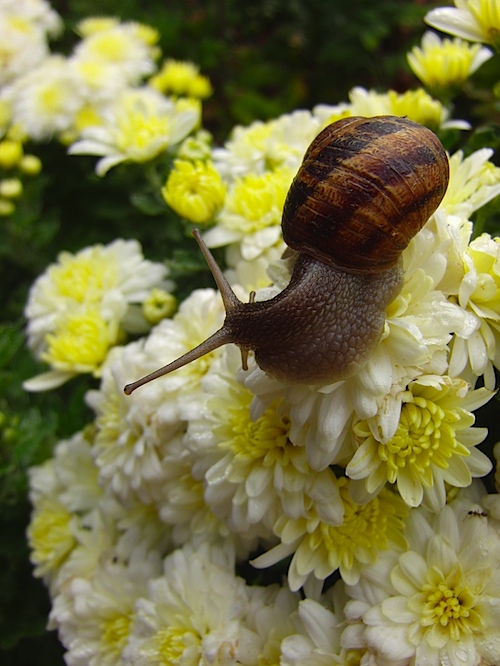 One of the surprises of the late summer and fall: A bunch of chrysanthemums I planted last fall have gone nuts (or run riot, perhaps). They were scrawny little things in pots last year with a few promising blossoms, They are big and lush and colorful now. All I've done is water them.

I started to realize in the past week they're also attractive to snails. I could see the shiny aftermath of the snails' slime trails on the flowers themselves. This morning was muggy and drizzly, and the snails are out there crawling all over the blossoms. Strangely, they don't seem to be consuming them. Maybe they're just fanciers of mums. 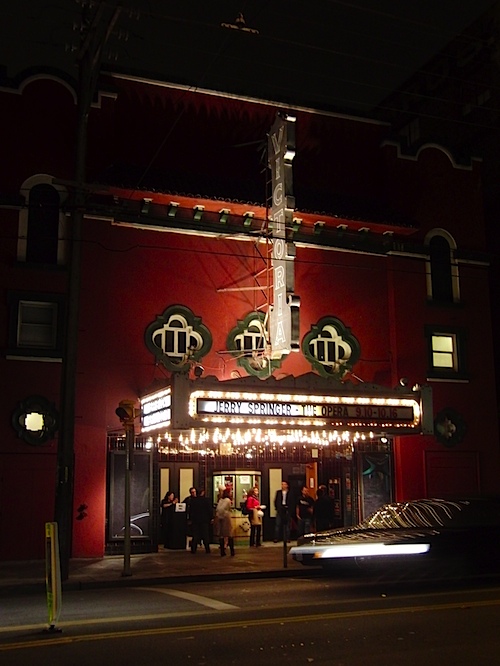 The marquee isn't quite clear here, but it says "Jerry Springer -- The Opera." I notice that there's a will-call podium set up under the marquee at the left, so the performance drew customers. The venue: the Victoria Theare, 16th and Capp streets, San Francisco.

What the heck is this production? Here's one answer. And I note a Web page claiming that Harvey Keitel performed in the title role at Carnegie Hall a couple years ago. If anyone who happens across this has seen the show, give us a mini-review, please. 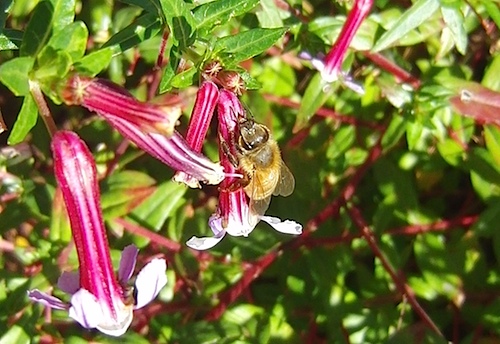 I wanted a picture of this plant, a shrub in my neighbor's yard, for a trip to the nursery. It wasn't until I was standing there that I realized the bush was full of bees. One happened to alight in one place long enough for me to get it in the frame. End of story. Except to mention that the nursery folks opined that the plant is some form of Cuphea; further research identifies this specimen as Cuphea lanceolata Starfire. 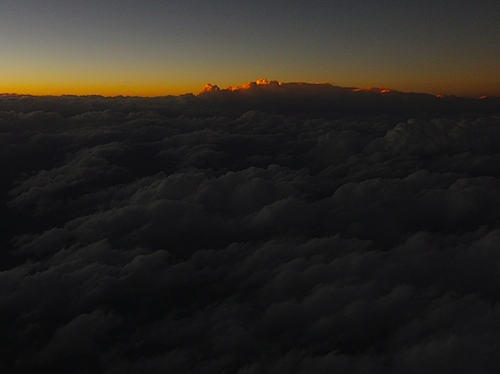 Flew back home last night, a flight that lifted off on O'Hare's eastbound runway 9R at 6:35 p.m. CDT, circled north, then climbed into a long westering sunset and twilight. We had cloud cover most of the way, but got glimpses of the Fox River, the Rock River, and the Mississippi. More gliimpses: Iowa farms, the North Platte River, Interstate 25 north of Denver. Further west, saw Utah Lake and the cities of Provo and Orem in the dusk. Then mostly blank, dark countryside until we crested the Sierra Nevada, where the lights of the foothills and Central Valley, the Livermore Valley and the Bay Area, all shone.

My seven Chicago days went fast. My dad is prone to what I might euphemistically call confusion about some day-to-day events (a confusion that does not extend to all things, though. When we drive around Chicago, he's generally pretty quick to answer requests for navigation help). I had told him I was leaving Thursday and reminded him of that a couple times before yesterday. I kept him abreast of my preparations to go yesterday. Still, he twice expressed surprise when I appeared with my suitcase and satchel and said I was heading out. "You are?" he said. "When are you coming back?"

A late stop into an all-night supermarket on the North Side. Inside, merchandise is scattered through the aisles ready to be stocked. A half-dozen people sit in the Starbucks cafe, which is closed, just talking or with laptops open using the wireless connection. I check out with my juice, half and half, and ice cream.

Outside, voices carry from the far end of the parking lot. A guy out there is holding a cricket bat. He tosses a white ball into the air and hits a high, high fly ball--what the non-cricket world calls a fungo--to a couple guys standing under the lights about 30 or 40 yards away. One catches the ball barehanded, and tosses it back to the batter, who takes it and whacks another high fly into the parking-lot night. 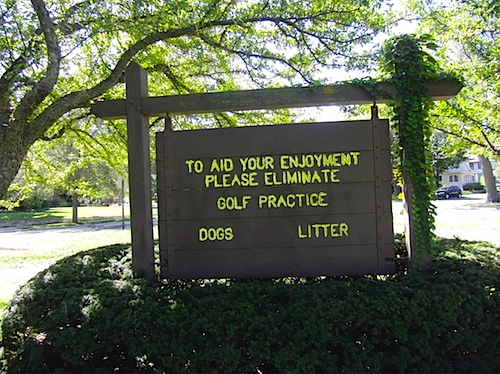 Sign in an Evanston park. Double entendres and odd spacing aside, the message overreaches in its officious officiousness. Refraining from golf practice, keeping dogs out, taking care not to litter--these things are not enough. They must be eliminated. To aid your enjoyment.