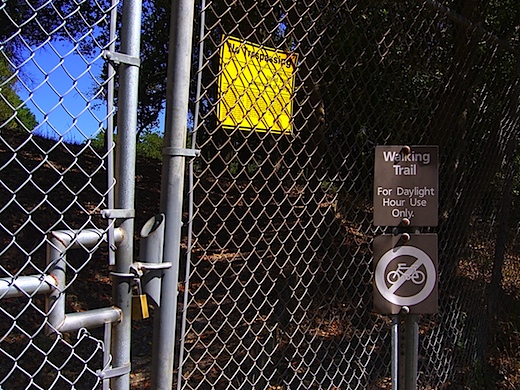 In a neighborhood in the hills just northeast of campus, Virginia Street climbs and twists to a dead end just above a short avenue called La Vereda Road. At the very top of Virginia, you find yourself in what appear to be a couple of private driveways. It looks like you've reached the top. But there's a path with jury-rigged railings and steps, some nicely carpentered, some hand-cut into a very steep slope. Going up to the top, your way is blocked by the fence and gate above. One sign seems to invite you to go farther; another sign warning of serious federal consequences -- the land on the other side belongs to the Lawrence Berkeley National Laboratory -- and a heavy lock on the gate stop you in your tracks. Except for the fact someone's going out of their way to maintain access across private property up to the gate, I'd think the gate is always locked. I've been up there maybe half a dozen times, have never found anyone on the street who knows what the deal is and have struck out looking online for any info. Maybe calling the lab is my next step, or maybe someone who reads this will have a key for that lock. (Below: the view from the gate, shot through my sunglass lens.) 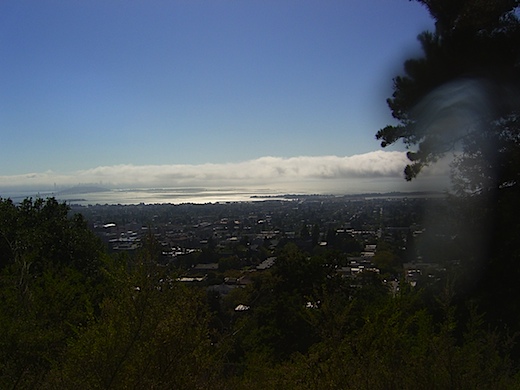 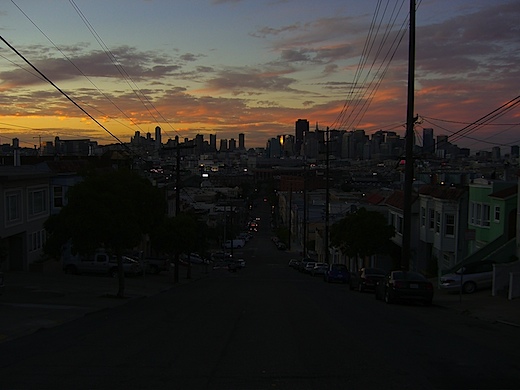 Beautiful summery night here -- which would be an odd statement in August almost anyplace else but the Northern California coast. It was warm with a variety of high clouds that were gorgeous as the evening came on. The sight and the evening's gentleness were enough to make me detour from my usual walk to the 16th and Mission BART station over to the Civic Center Station on Market Street.

A memory, and just one. Robert Kennedy was shot on the night before our last day of school in 1968, my last day of eighth grade. I remember going through that day not quite able to understand how life seemed normal for so many of those around me. But it did. A neighbor had planned a picnic for that night, and it went on as scheduled. But life that evening did not seem normal; all the adults were stricken. After midnight, Bobby Kennedy died.

Then we re-enacted the ritual remembered from the president's assassination five years earlier, repeated with the killing of Martin Luther King just a couple months before Bobby was slain: a lying in state, a public funeral, a farewell.

It fell to Ted Kennedy to give the eulogy at his brother's funeral. I was sick that day and so beside myself--talk about things you never get over, and this was one for me--that I don't remember much of what he said. The bulk of the text came from Bobby himself, but mostly I recall the end, when he struggled to finish without breaking down. What a loss for him and his family, what a loss for us all. And despite all the personal stumbles, missteps, and humiliations Teddy suffered later, what strength it took for him to go on.

(The text of his Robert Kennedy eulogy is here, and the MP3 is here; you can also find it on YouTube with a variety of slide shows that range from the almost cloying to the bizarre.)

By now, most who have a voice -- meaning journalists, broadcast rabble rousers, pundits, lobbyists, think tanks, and public officials both elected and unelected -- have turned the current attempt to address shortcomings in our health-care system into a Clintonesque quagmire. What ought to be a simple, focused discussion--Everyone must have health insurance as a matter of national well-being. That insurance must not bankrupt anyone. How do we do that?--has become a mash of impenetrable rhetoric and hysterical charges. It's amusing that the right has even taken to trying to make the problem of the uninsured go away by manipulating numbers. Zap those uncovered folks with a calculator, and they go away!

George Lakoff of the University of California, Berkeley, is a pioneer in the field of cognitive linguistics and an authority on the workings of framing in public debates. His well-publicized take in The Huffington Post is that the president and his people have blown it by making the health-care debate a pure policy discussion. He urges the administration to reframe its health care program "as An American Plan" that "guarantees affordable care for all Americans." He then proceeds to lay out a messaging strategy to communicate that simple idea. The HuffPost piece is also worth reading for its critique on what Obama's chief advisors do and don't get about communicating with the public. If you think Lakoff's argument is a little lofty and disconnected from reality, bear in mind that in February 2008, long before the issue was decided, he was predicting Obama would win the Democratic nomination and presidency, in large part because of the deftness with which he framed his candidacy. The guy's got some cred.

Yes, the details of covering all the uninsured and making coverage affordable for everyone are complicated. But making that goal clear and repeating it at every opportunity is probably the only way to overcome the fear-mongering of those who would like to kill the plan and cripple Obama's presidency.

From "The Only Show in Town":

"Maybe life is just put on for show,
Oh, but it's the only show in town.
It don't cost a nickel to get in,
Oh, but you pay dear to hang around.

"And maybe love's a joke you heard before,
Still it makes you laugh until you cry,
Laugh until you're rolling on the floor,
Until the tears are streaming from your eyes."

©1976 Jesse Winchester
From the LP "Let The Rough Side Drag" 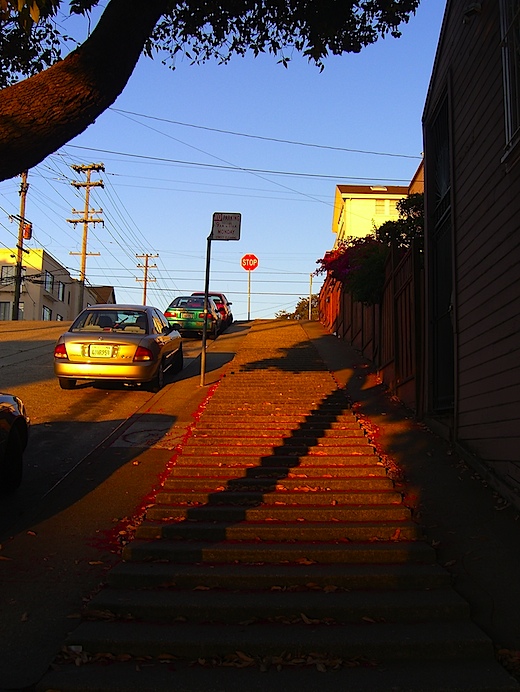 On Mariposa Street, just east of Potrero Avenue. This one-block slope is at the beginning of my Friday evening walk from KQED to the Ferry Building. From that stop sign up above, I turn right, then cross U.S. 101 on the pedestrian overpass that connects to 18th Street on the east side of the freeway. One more block up from there is Kansas Street, a corner with one of the great views of downtown. From there, I walk north and east down the slope of Potrero Hill and across the South of Market flats to the Bay, sometimes walking over the low eminence of Rincon Hill. What I noticed most about the walk this week: It's getting dark much earlier than it did just a month ago. 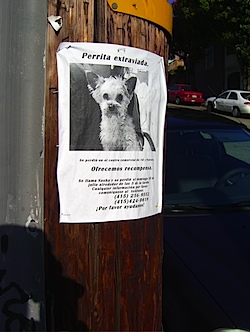 In San Francisco on Mariposa Street, on the hill just east of Potrero Avenue.

From the collection. Without permission of owner.

We're just in from the last dog-walk of the night. The typical August overcast is here, a low cloud cover that reflects the lights of the city and creates an un-dark condition, a kind of infernal twilight that persists from sundown to sunup. A very unromantic, blatting horn--maybe a train, maybe a very annoying truck--sounds in the night. Overall I find the scene less than enchanting. I probably need to get to bed.

The date palm a couple blocks away, the one where our neighborhood barn owls have been nesting, is quiet. The birds have moved out, almost. We got up early this morning to try to see the birds before full daylight. We have been hearing the birds in the area after dark, and we thought maybe we'd see them fly back to their nesting tree before the sun was up. In the non-rosy-fingered dawn--it was more like a wooly gray-blanket dawn--we heard what sounded like one bird in the palm. Then, at about 6 o'clock, two owls flew out of the tree and headed northwest, in the general direction of the bay. No other sound came from the tree, and there was no sign of the other three or four birds we figured were there as recently as a couple weeks ago.

We went back for this evening's overcast sunset. Again, silence from the tree. But as it got dark, first one and then a second barn owl flew into the palm--from the northwest, the same direction we'd seen them go this morning. After a few minutes, one of the pair flew out into the dusk to hunt. We heard one or two other barn owls in the neighborhood, but didn't make another sighting. We'll look again tomorrow. 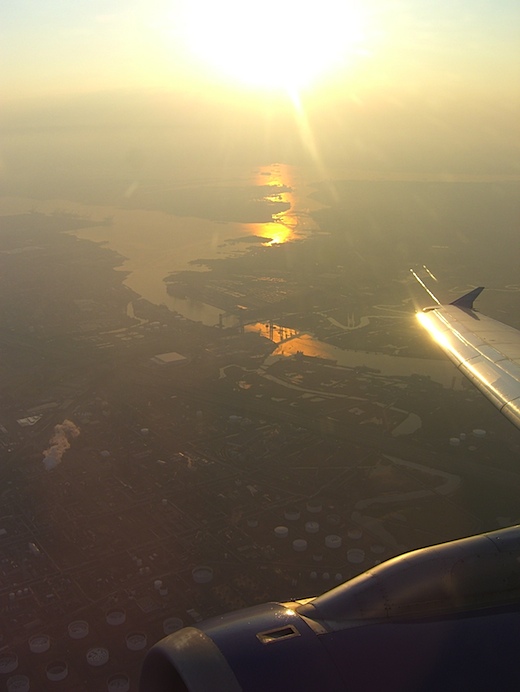 We're back west. And to get here, we took a flight at 6:30 a.m. from Newark to San Francisco. That's a shot out a starboard window, a couple minutes off the runway. It was a beautiful trip, even if most of the pictures did not turn out.

To get to the flight, we got up at 4 in the morning or so and were on our way from our friend Lisa's house to the airport at 4:30. The weather on the other coast was summery but not appalling. Meaning humid and warm bordering on hot. I saw in the weather forecast last night that alerts for poor air quality had been issued for parts of the New York area, and a string of 90-degree days are coming up, too. Maybe we dodged some unpleasant, sticky, August weather. I don't mind missing it. What I will always miss, what memory does not oversell, are the nights, so warm and lush they practically demand you come outside and sit or stroll.

Back by our bay, our summer is in full force, too. Sunny and highs in the 70s. After sunset, the temperature was a breezy 60. Our summers aren't oversold either: they're humane and let you go from Memorial Day to Labor Day without thinking about air conditioning. You just need to remember your sweater or flannel shirt for that after-dark walk, and your fine.