A note from a friend:

"Sounds paranoid, but has any news outlet checked this out? http://prisonplanet.tv/articles/may2004/052504digitalwatermarks.htm

[Text at that link:] "There are several postings on message boards
suggesting that the digital watermarks on the Berg and Abu Ghraib
videos are exactly the same. While at this point we have no concrete
confirmation of this, it would fit with other examples of how the Berg
execution and Abu Ghraib torture scenes are very similar. The
contention is that Berg was killed by the US military as a staged
psy-op to distract attention from the torture scandal, an execution
blamed on 'CIArabs'."

"Give me a fucking break. Honestly. The first conspiracy theories about this were floating around on the Web within 24 hours of the Berg news being reported. I'm sorry, I take this as a sign of our spreading sick credulity, in the same category with the reports that all the Jews working in the World Trade Center were told not to come to work on 9/11 (sounds paranoid! but did anyone in the media REALLY check it out thoroughly???). "

Should the media be skeptical and inquisitive? Of course -- much, much more so than they generally hves been in the whole Iraq affair, especially at the outset. And yeah, of course, rumors should be checked out. But take a look at the link, and you find not a rumor, but an urban legend: People posting that they've seen messages on the Net about video watermarks, about anonymous experts at Kodak who've analyzed the Berg and Abu Ghraib videos, and how the whole thing is going to break on national news "tonite" (at some unspecified point in the past). Do I have a knee-jerk tendency to reject this kind of rumor-mongering? I do, and I often have to check that to see that I'm not reacting out of pure defensiveness or unwillingness to believe unpalatable truths. On the other hand, I wish people were a little less willing to believe whatever some "authority" says on the topic of the day, whether it's Colin Powell talking about the mobile bioweapons labs in Iraq or some doofus pushing his Nick Berg conspiracy theories online.

I think the damage in focusing on nutso rumors, like the ones about the Kodak experts and the digital video watermarking, is that real aspects of the events that led to the Berg murder are overshadowed or ignored. For instance, it's clear that Berg was in custody and had contact with U.S. agents, officials, and troops. How about a full accounting of those contacts, a real timeline, so we can get an idea of how he managed to fall into the hands of his captors? (Yeah, I believe some bad Iraqis who don't like us killed him, not some CIA types doing "psy-ops"; if for no other reason, I believe that because the CIA hasn't managed to get a single thing right in Iraq that we know about, and I find it hard to believe their first successful operation was cutting off this kid's head.) If we get that accounting, then we'd have a picture of U.S. officials' real culpability in what happened to Nick Berg.

At 1 a.m. Friday (about two hours and 10 minutes from now), TechTV's signal will be merged with G4's,  and something called G4techtv will be born. What a business: Ziff-Davis, Paul Allen, and now Comcast have dumped hundreds and hundreds of millions into TechTV between the startup, Allen's purchase from ZDTV and other investors (he's reported to have spent $320 million on it), Comcast's buyout of Allen (they reportedly spent $290 million), and all the money that's gone into operating the beast (an unschooled guess would be $100 million total over TechTV's run; though I imagine it easily could have been double or triple that). And after all that money and six years, the channel is back to semi-start-up mode (though it's a very well distributed start-up, with 44 million households to start). It'll be interesting to watch the trajectory.

A brief, non-exhaustive accounting of layoffs at my various workplaces since I left the world of secure employment at the San Francisco Examiner a little more than eight years ago (when I got hired there, one staffer said, "As long as you don't hit anyone over the head with a two-by-four, you can't get fired here." He was almost right: He got axed for trying to impersonate a worker at a hospital that was on strike so he could get the inside scoop). A while back, I started to think of the recurring staff-trimmings as resembling the show "Survivor," and I wondered when it would be my turn to get voted off the island. My time finally came: As Jeff Probst would say, "Dan, the tribe has spoken. It's time to go."

1. November 1996: About 75 of 150 temporary and permanent employees let go from NetGuide.
2. December 1996: About 40 of remaining 75 NetGuide employees.
2a. Left NetGuide in February 1997, which laid off remaining workers the following month and closed.
I started at Wired News in March 1997.
3. November 1997: About half a dozen Wired News employees, part of larger Wired layoff.
I left Wired News for Wired magazine in June 1998, and left the mag in December '98 to freelance. I joined TechTV in January 2001 as part of staff hired to launch 8-hour daily tech/market news show called "TechLive."
4. November 2001: TechTV laid off about half of 130-person "TechLive" staff.
5. April 2002: Laid off about half of remaining 65 "TechLive" staff members, canceled 6 a.m. and 1 p.m. shows, cut newscast to 30 minutes daily.
6. December 2002: Closed TechTV bureaus, which reported for "TechLive"; laid off about 10 people.
7. May 24, 2004: Goodbye, TechTV. Last daily "TechLive" show aired Friday, May 21; I, with most of daily staff, was laid off the following Monday).

Not to self-promote too much, but it occurred to me while writing earlier that my involvement with TechTV actually goes farther back than my employment with the channel. About five and a half years ago, I reported on ZDTV (the station's former name) for Wired: "You-Gotta-Be-Kidding TV." It was my first assignment after I left the magazine to try my hand at freelancing and my first long feature ever. It's pleasing to read now; I think it's held up pretty well.

One small personal irony is that now I'm going back to freelancing, at least for the time being (I don't anticipate doing a story on the channel now, though). A larger irony is that, through a history that involved ownership and management changes and a couple huge shifts in programming philosophy, ZDTV/TechTVmet the big challenges I wrote about. It kept expanding its reach, building an audience (a small but growing one), and establishing an ad base that was far richer than what even the CEO anticipated when I interviewed him (the big win there was to get past the reliance on tech-related advertising and bring in consumer companies, like carmakers; in fact, it's similar to the ad mix that made Wired a publishing phenomenon). But despite the success, the channel is history.

On one level, the swallowing up of TechTV is just the way business goes. An early analysis of the sale called it "a teardown": Comcast was buying the property to knock down the house (our programming, staff, and other assets), keep the real estate (our access to 43 million cable- and satellite-subscriber homes) and put up something new there (its G4 game channel, which has reportedly run through a big pile of money and has just 13 million or so households). Fine, it's their dough, and you can play that way if you ante up. That doesn't mean it's a smart play, though you can't really blame the buyers. The perverse part is the fact the former owner (Paul Allen) sold the property without any apparent concern whether it would be torn down or not. All you people who've worked to build this into something -- get moving, because the building's coming down. Last night was our last show. Odd to say it, given all the complaining I've done at work and away from work about wanting the show to be better, the stories to be better, everything to be better; and odd to say given all my doubts about whether what I was, we were, doing was meaningful at such a dark time in our world and our history; but: yes, I'm sad to see it end and to have my connection to a pretty great group of workmates severed. I was there three years, four months, and two days (not that anyone's counting, and I still have to go in Monday for the final handshake and to turn in my laptop and keys and such). Anyway,the picture is a screen capture I ripped off a bulletin board on TechTV help guru Leo Laporte's site. I'm there somewhere in the back.

What Your Neighbor Gives

Hoo-ha today over a New York Times story about FundRace.org, a site that takes public information on campaign donations from the Federal Election Commission and makes it easy to see who's donating how much to which candidates -- and where the donors live. The concern is privacy, whether it's a good idea to map the donations to names and addresses right in your neighborhood. Here's the thing: All the information has been publicly available online -- for instance, at the Center for Responsive Politics' OpenSecrets.org -- and that's a central feature of the campaign laws to keep things above board. All FundRace does is to eliminate a couple steps online searchers have to make on the FEC and other sites. I think it's a great idea, even if it allows me to discover the embarrassing fact that three-fourths of the Brekkes who show up in the database have contributed cash to the wrong guy.

A pretty good story in the Wall Street Journal: A cement shortage is threatening the building boom in the United States. That's because a lot of the cement used to make the concrete that goes into home foundations and big projects like the Bay Bridge project comes from overseas sources like Thailand and Colombia. The cement can't get here because a building boom in China is tying up ships bringing construction supplies there.

"The cement shortages exacerbate a headache for the U.S. building industry from increasingly scarce materials. Steel supplies have been tight, with prices for many products soaring more than 50% since January.And wood supplies have been so tight that the composite price of framing lumber -- a kind of index price that reflect a mix of lumber products -- has jumped more than 60% to $463 as of Friday from $285 a year ago, according to Random Lengths, an industry newsletter in Eugene, Ore. Some of the price increases are being passed on to consumers."

I also like the fact there's a newsletter called Random Lengths.

Not exactly the Apollo program, but a big piece of space history nonetheless: A bunch of amateur rocketeers actually succeeded in launching their craft on a suborbital flight (altitude 70 to 77 miles) earlier this week. It's the first time a privately funded, nonprofessional group with no government ties or money has managed to put something in space. The team's leader, Ky Michaelson, is a former movie stuntman who lives in the Minneapolis area.

Just one small thing: Today, my son Eamon graduated from the University of California, Berkeley, one of 36 students in the East Asian Languages department who got their bachelor's degrees (Eamon's major was Japanese). I forget the exact words, but after the diplomas were all handed out, the department chair congratulated the group and said something like, "You're now part of the community of educated men and women." What a great accomplishment for Eamon. And the rest of the group, too. But especially Eamon. Did I mention he's my son? 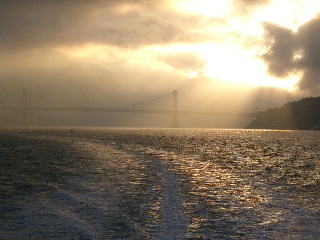 From a little earlier on the same May 7 trip. The bridge and Yerba Buena Island as the fog and low clouds blow in. Amazing light.